Skip to content
British-born Katie likes to describe herself as a 'citizen of nowhere', but at YPFP Brussels she'll always have a place to call home. For many years she has poured her heart and soul into the branch, first as a member of the comms team and currently as Managing Director. As she gets ready to leave for greener pastures, we sat down with her to find out what it takes to lead a branch of YPFP, and hear what the future holds for Katie.

What do you do in Brussels?
Currently I work as a Press Officer at the European Commission, communicating about digital and research policies. 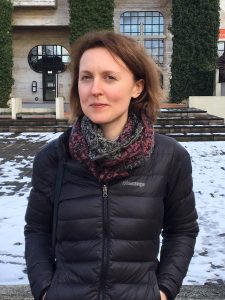 When did you become a YPFP member? Why did you join?
I joined YPFP almost exactly three years ago. I'd been in Brussels for about a year, having initially moved here to do a traineeship at one of the European institutions. That highly enjoyable experience was becoming a distant memory, and I was looking for a new challenge that would help me make new friends and contacts in and around the Eurobubble, so I decided to not only become a member but also apply for a position in the Communications team. At the time I had no idea of the large role in my life that YPFP would go on to play!
What does the Managing Director role entail? How did you excel in this position?
The Managing Director is responsible for the smooth internal running of the organisation: welcoming new staff and ensuring they have all the information they need, planning meetings for the Board of Directors and communicating decisions taken, and organising staff training and socials. I also worked very closely with Georgiana Dragomir, the Executive Director, to oversee YPFP's day-to-day operations, from running events and launching communication campaigns to developing relationships with new partners. I feel that Managing Director is a role that requires attention to detail and the ability to keep track of a lot of different issues at the same time, and luckily I have a good memory and have had plenty of opportunities to develop my organisational skills over the years.
What have been some of the highlights of your time with YPFP, either as a member or staff volunteer?
As I said before, YPFP has been a big part of my life over the last few years. I ended up making a much more substantial commitment than I had ever previously made to any voluntary activity, mainly because YPFP has offered so many opportunities for friendship and camaraderie, and also the kind of chances to develop leadership skills that can be scarce in Brussels. I now feel much more confident in my capacity to coordinate people and get things done. In addition, I have regularly been reminded of the importance of pushing myself, partly thanks to YPFP colleagues pushing me: I wasn't even going to apply to become Managing Director until I was persuaded to do so by Fabio Bauer, our previous Executive Director, but I'm now very glad that I did.
On a more personal note, I have worked with some wonderful people and it has been a privilege to get to know them: moments when we are all together as a team are always special, whether that's a Christmas party in a pub or a teambuilding weekend away that includes swimming in the chilly North Sea.
Can you give some advice to anyone who may be interested in becoming a YPFP staff member?
I have always told new YPFP staff that you get out what you put in - it sounds like a cliché, but it happens to be true. YPFP shouldn't take over your life (although it can occasionally threaten to), but if you come to as many events as you can, help out other teams, and find out how the organisation is run, your experience will be all the richer.
What does the future hold for you, as you step down from YPFP?
Before I came to Brussels, I studied Classics (ancient Roman and Greek history and literature) and did a doctorate on the ancient historian Tacitus, who wrote about Rome under the first emperors. Although I decided that full-time academic life wasn't for me, I am still very interested in the Classical world. I have published a number of specialist articles, and for the past year I've been working on a book that is partly a memoir of my studies and travels in the UK, France, Romania and Belgium, partly an adapted version of my thesis, and partly a commentary on contemporary events, especially Brexit. In short, it is all about how coming to Brussels made me realise that Tacitus' writings could be a lot more relevant to the present day than they seemed when I was sitting in libraries writing about them. The first draft is fairly close to completion, but I am looking forward to having more time to spend on it.
Before you go, tell us a fun fact about yourself!
As a student, I was part of a team that competed on University Challenge, a famous British TV quiz programme. Unfortunately, we were heavily defeated in the first round, but we did get to meet legendary journalist and presenter Jeremy Paxman.
Posted in Brussels