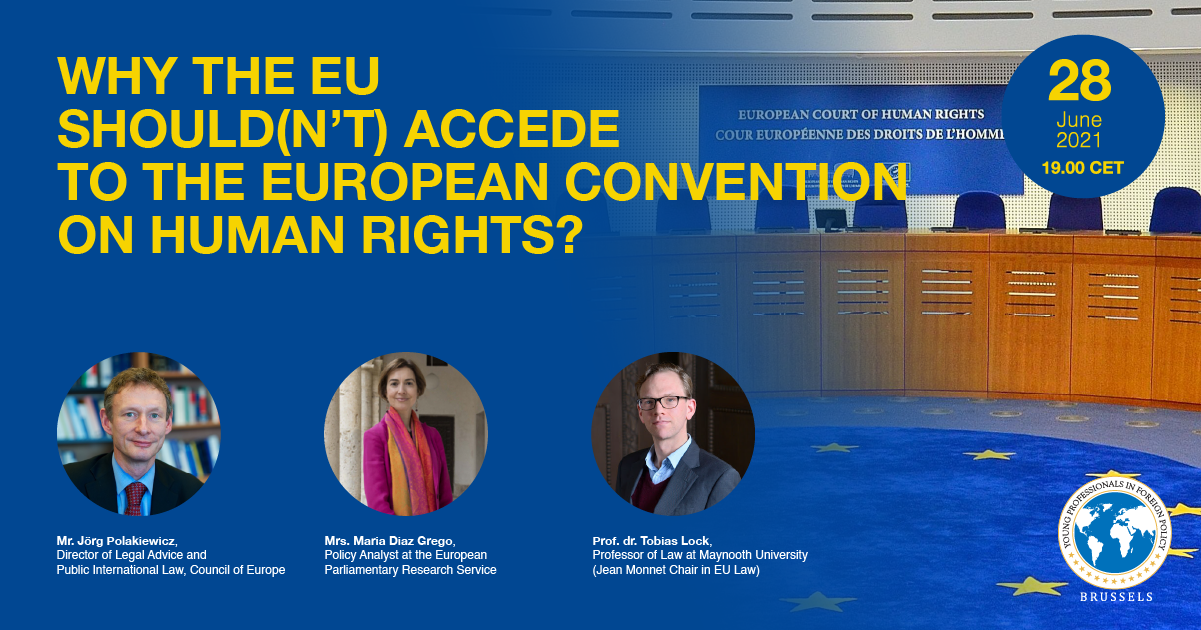 On 28 June 2021 YPBP Brussels hosted an event with Mr. Jörg Polakiewicz, Director of Legal Advice and Public International Law, Council of Europe, Prof. dr. Tobias Lock, Professor of Law at Maynooth University (Jean Monnet Chair in EU Law and Fundamental Rights) and Mrs. Maria Diaz Crego, Policy Analyst at the European Parliamentary Research Service on the accession of the EU to the ECHR and the ongoing negotiations under the Chatham House rules. The panel discussion was moderated by YPFP Brussels Programmes Officer, Ellen Cantraine.

The panel discussion tackled some pressing questions such as why the accession is still relevant today and which (legal) issues need to be addressed in the negotiations. After a brief introduction, all three speakers gave a short presentation of their views on the accession and what difficulties they see, one of the speakers also briefly touched upon the ongoing negotiations.

Before the accession agreement can be concluded, there are still many problems to be solved. It is also a legal obligation under the Lisbon Treaty to accede to the ECHR. But both the ECJ (European Court of Justice) and the ECtHR (European Court of Human Rights) have diverging opinions, especially the problems concerning mutual trust and common foreign and security policy have to be solved, as well as the problem of autonomy of EU law, which was addressed in Opinion 2/13 of the ECJ.

First, Opinion 2/13 of the ECJ was briefly discussed and the impact it has had on the accession that is still not completed. Secondly, the experts expressed their views on the gaps that still need to be filled before accession can take place. These issues will also need to be resolved during the negotiations. Two important gaps were discussed in-depth: the principle of mutual trust and the CFSP, for example as a general rule the CJEU has no jurisdiction over CFSP, therefore, the ECtHR should not be empowered to rule on CFSP acts for whose lgality the CJEU cannot review.

It remains important to solve the gaps in mutual trust so that the principle of mutual trust does not fall at the expense of the individuals for whom it is intended in the first place. It was clear to all three speakers that there is still a long way to go before the EU can accede to the European Convention on Human Rights, there are still many hurdles to be resolved during the negotiations. Nevertheless, there was unanimity that it is desirable for the EU to effectively accede to the ECHR so that, among others, the ECJ and the ECHR maintain the same human rights standards and there is no risk of fragmentation in the human rights landscape.

It is important to remember that solving one gap might create another gap (and potentially bigger) that needs to be solved.