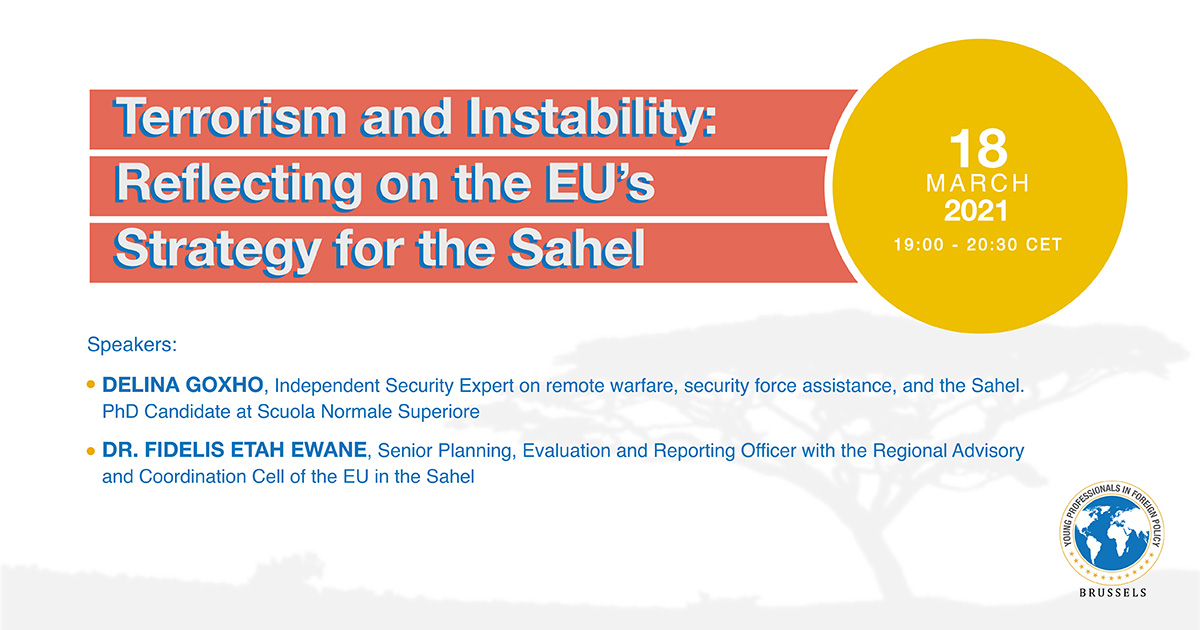 On 18 March, 2021 YPFP Brussels hosted an event on the EU’s Strategy for the Sahel. The panel was moderated by YPFP Brussels Deputy Director of Security and Defence, Marija Sulce, with guests Dr. Fidelis Etah Ewane, Senior Planning, Evaluation and Reporting Officer with the Regional Advisory and Coordination Cell of the EU in the Sahel; and Ms. Delina Goxho, Independent Security Expert on remote warfare, security force assistance, and the Sahel, PhD candidate at Scuola Normale Superiore. This event was held at a key moment for the EU's involvement in the Sahel - the previous EU Sahel strategy had ended in 2020. Since the event, the Council of the EU has approved and published conclusions, reaffirming the importance of stepping up the EU and Sahel’s partnership through an ambitious EU strategy setting the framework for its policies and actions in the region.

Ms. Goxho opened the event by presenting the Sahel region and its security situation. The region is highly unstable with violence rampant due to various armed groups. Groups, affiliated to the Islamic State and al-Qaeda, are some of the most active, but there are many other armed groups, as well as local armed forces, that perpetrate violence against each other and the local populations. The crisis is exacerbated by unstable and sometimes even predatory local institutions, instability of the economy, climate change, and poor humanitarian conditions (see Figure 1). Situated close to its southern border, the Sahel is and will remain an important security topic on the EU’s agenda.

In his opening remarks, Dr. Ewane presented the Regional Advisory and Coordination Cell (RACC) of the EU in the Sahel and its mandate. The RACC is the first EU organization with a regional mandate, which works to coordinate all EU’s efforts and missions in the region. He also presented what the EU’s strategy for the Sahel has been since 2011, arguing that it has focused on improving the competence of the local authorities, countering structural poverty in the region by encouraging development, and preventing radicalization of the populations. From a political point of view the EU’s Strategy has had significant achievements, bringing its Sahelian strategy into focus, making progress on the development front, and conducting capacity building efforts in support of local authorities.

During their further remarks both speakers delved deeper into the successes and failures of the EU’s Sahel Strategy and reflected on how a new strategy could be improved. It emerged that there needs to be a more holistic and regionalized approach to the Sahel. Dr. Ewane stressed that a new EU action plan  should be pursued with the political commitment and engagement of the G5 Sahel members. Its priorities should be the prevention of radicalization, creation of youth opportunities, and better management of borders. Ms. Goxho added that there is a need to focus more on civilian protection, better governance, security sector reform, and to think of the stability in the region as a long-term matter.

The presentations of the speakers were followed by a Q&A session with most questions focusing on the best ways to counter terrorism and extremist ideologies in the Sahel. Terrorism is at its core based on ideology, so it cannot be defeated with arms alone. There is a need for stronger local institutions and increased trust in local authorities. Dialogue with terrorist groups should not be off the table as all avenues should be pursued when trying to counter extremism. But this is not easy to achieve due to various political constraints.