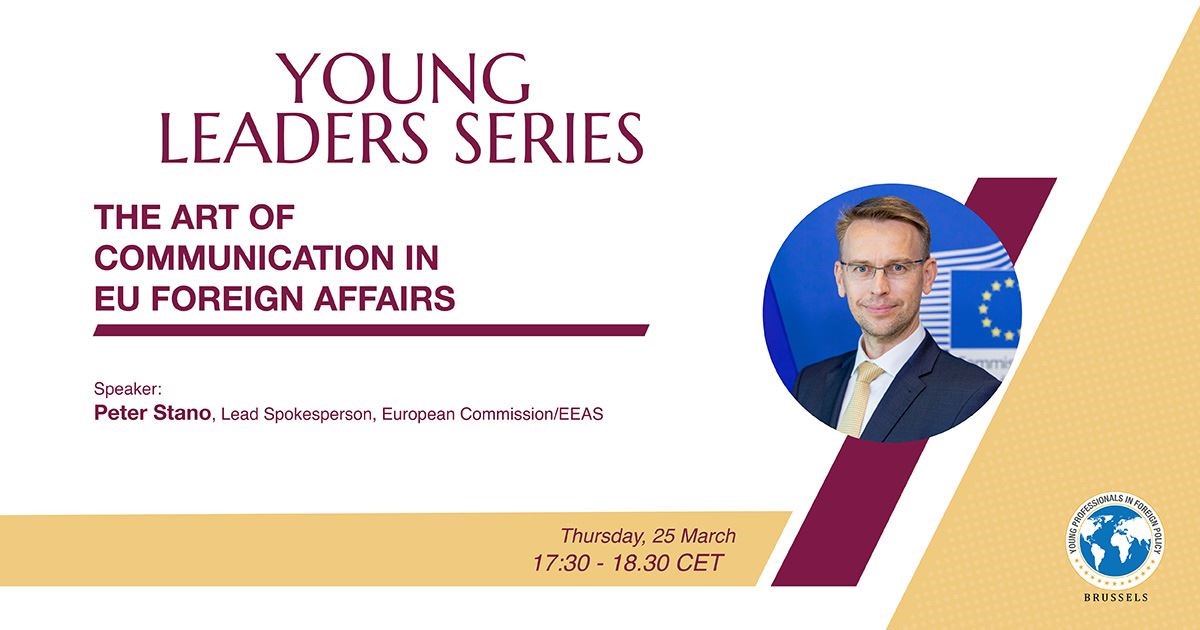 On 25 March, 2021 YPFP Brussels organized the third event of the Young Leaders Series, focused on the art of communicating the EU’s foreign policy. The webinar was moderated by YPFP Brussels Deputy Director of Programmes, Radu Danu, who was joined by a distinguished guest speaker, Mr. Peter Stano, Lead Spokesperson on Foreign Affairs and Security Policy of the European External Action Service (EEAS) and the European Commission (EC).

The discussion started with a short presentation of personal professional career path of Mr. Stano, who outlined the complexities of daily work as a spokesperson in European Commission. According to him, the day of a spokesperson can be busy and challenging, while he always needs to take into acocunt the various point of views and possible different reactions of EU Member States when preparing a press briefing.

The speaker became in 2011 the spokesperson for the EU commissioner for EU Enlargement Negotiations and Neighbourhood. In 2014 he started working as a spokesperson at the Slovak Ministry of Foreign and European Affairs. After this, he was posted as a diplomat at the Slovak Embassy in Beirut, where he served as a Deputy Chief of Mission. Mr. Stano shared his passion for diplomacy while working at the consulate, mentioning his plans to pursue a career in diplomacy after finishing his mandate as lead spokesperson for the EC and EEAS.

While the speaker underlined the huge privilege to speak on behalf of the European Union, he made several remarks regarding the strategic communication work of EEAS on combating disinformation and fake news.

The discussion was followed by a Q/A session with questions on current EU-China relations, recent visit of EU’s High Representative for Foreign and Security Policy, Josep Borell, to Russia, personal experience of the speaker in combining journalism with diplomacy and many other topics.

Overall, Mr. Stano pointed out the fact of being very grateful for his career path. He advised young professionals to always try their best in what they are doing. In addition, he recommended the YPFP members to travel as much as possible, get to know different cultures, take part in cultural and student exchanges programmes, become fluent in several languages, and to build the network.

The audience provided very positive feedback after the event. Many members were impressed by his career path and language skills. The art of communication in EU’s diplomacy presumes a lot of work, flexibility, and passion for delivering the common EU’s position in a transparent and professional way.

“Communicating is a tiring job but gives enormous satisfaction!”