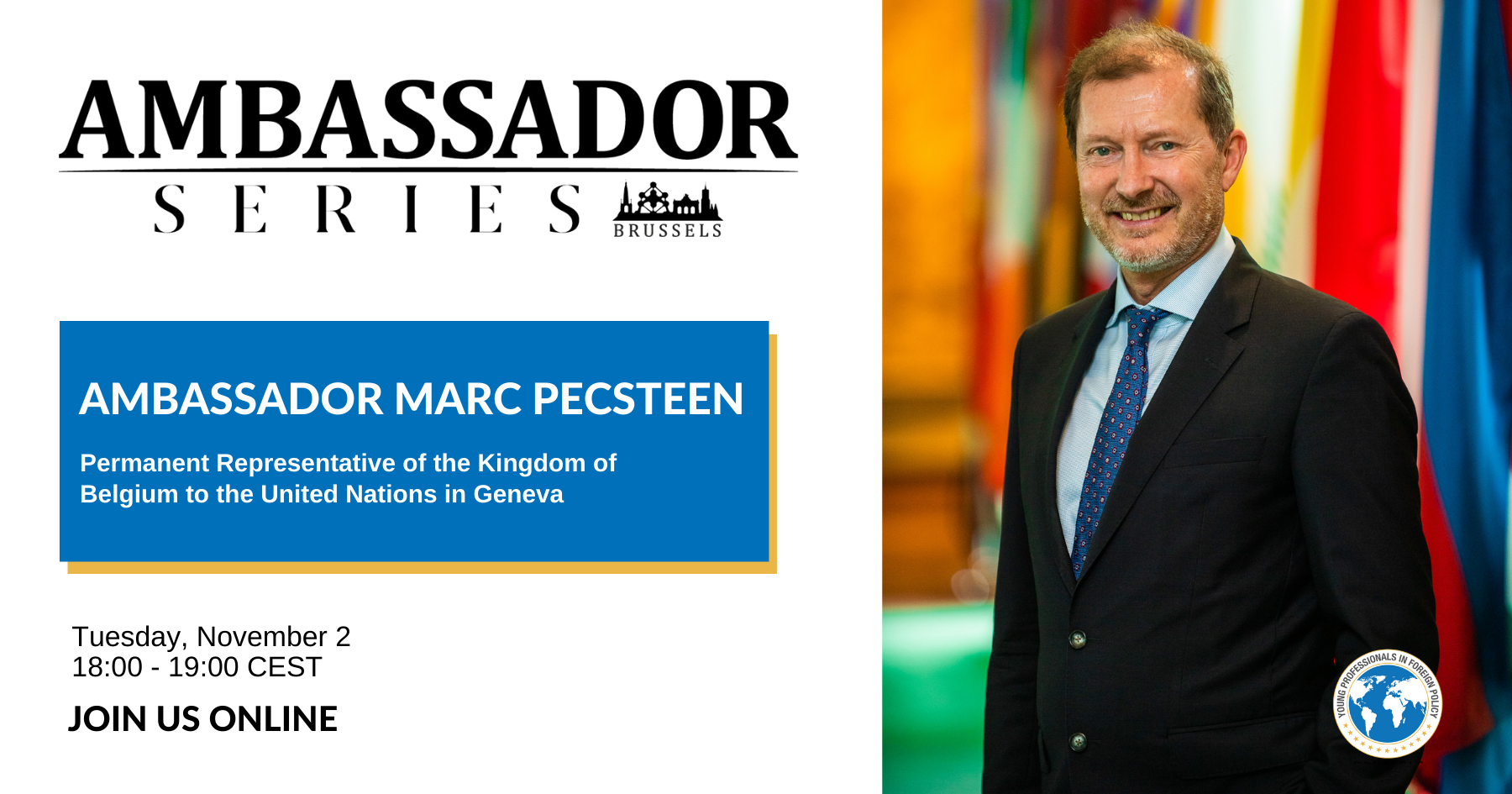 On 2 November 2021, YPFP Brussels welcomed H.E. Marc Pecsteen, Permanent  Representative of the Kingdom of Belgium to the United Nations in Geneva, to discuss  Belgium’s role in the UN and the other Geneva-based institutions. The event was organized  and moderated by Fiona De Cuyper, Ambassador Series Officer with the Programmes Team  of YPFP Brussels. The event was held under Chatham House Rule.

Belgium remains a firm advocate for multilateralism, which is demonstrated by its extensive  engagement with the UN system and its commitment to the EU. Belgium attaches great  importance in making the EU Member States speak with one voice on as many issues and in  as many international fora as possible. This is also why it emphasizes that national statements  of the Member States should always reinforce the EU statements. This, in turn, reinforces the EU’s position of agenda setter in the UN and its power of being a convincing force towards  other UN-members.

Three issues are situated particularly high on Belgium’s agenda in Geneva, namely human  rights, health, and autonomous weapons. Human rights are the biggest priority for Belgium,  and it is working hard on its candidacy for the Human Rights Council elections next year. It  attaches great importance in working together to not let other UN-members dilute the  importance and vocabulary of human rights as such and its main areas of interest with regards  to human rights remain Central Africa and the Middle East. Belgium also works on raising  awareness on socio-economic rights as opposed to purely political rights as it is convinced that  by disregarding socio-economic rights, we leave the door open for conservative countries to  impose their agendas. Secondly, when it comes to health, Belgium is a firm supporter of the  COVAX-program and has contributed significantly. It also supports the EU’s proposal for a  pandemic treaty and is working on convincing resisting UN-members. The ultimate goal of  this treaty is to ensure translation of pandemic rules into national legal systems. Thirdly, with  regards to autonomous weapon systems, Belgium is chairing a working group that focuses on  developing recommendations for normative and legal frameworks on the use of autonomous  weapon systems by the end of the year. It emphasizes the need for a clear definition on what is  allowed and what is not as the systems behind autonomous weapons can have other, positive  uses, but caution is required as autonomous weapons can have far-ranging consequences for  the way we wage wars.