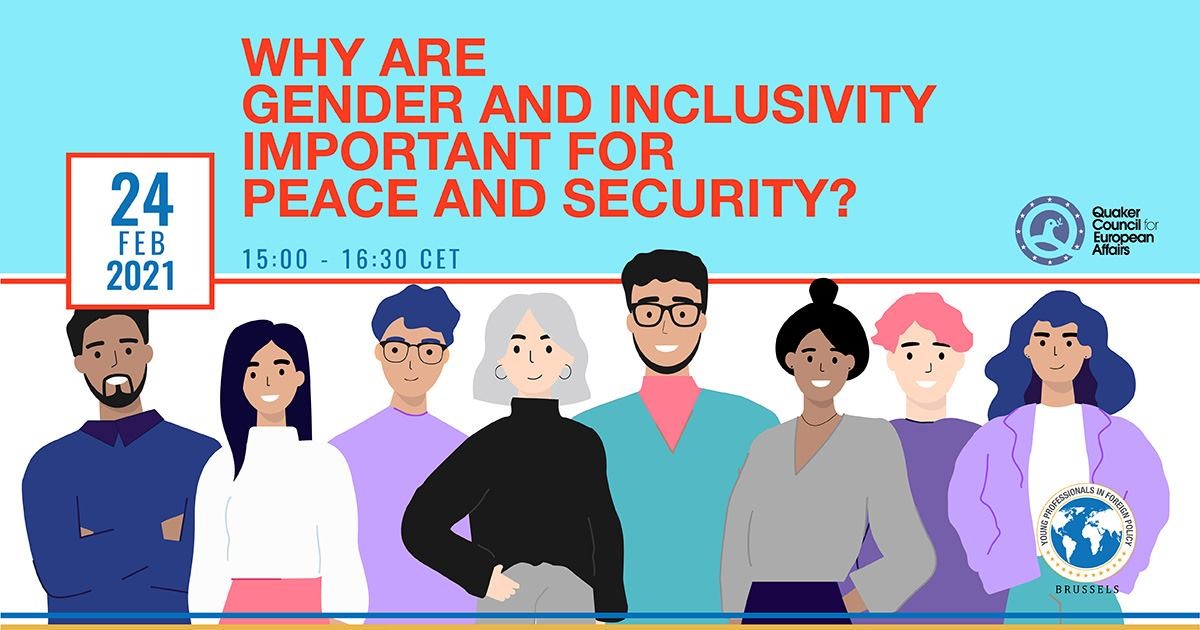 On 24 February, 2021 YPFP Brussels hosted an event in partnership with the Quaker Council for European Affairs on the importance of gender and inclusivity in peace and security. The panel was moderated by YPFP Brussels Director of Security and Defence, Elisa Cherry, with guests Dr. Katherine AM Wright, Senior Lecturer at New Castle University; Gabriel Nuckhir, Project Officer for Gender and Peacebuilding with International Alert; and Sophie Borel, Crisis Response Planner for the European Commission’s Service for Foreign Policy Instruments.

The discussion opened with Dr. Wright outlining some of her previous work on gender and setting the stage for discussion on how institutions co-opt the transformation to engage women in peace and security or not. She noted that just because institutions are vocal about Women, Peace and Security (WPS) as an initiative doesn’t mean that they support it, or give space to create an open dialogue on the matter. There is a large difference between the way that women, women of all types, experience security, a notion that was reaffirmed by both Gabriel and Sophie throughout the discussion.

The need for a more inclusive and intersectional approach to gender in order to create a more comprehensive approach to gender was at the forefront of the conversation. Relations between and within genders often co-opt the expectations of gender norms, as noted by Gabriel, and this often translates into the definitions of power relations, both within work places, peace processes and other gendered spaces.

In the realm of security and ensuring peace, there is concern that women are included simply because of their gender. Critical analysis is vital, to identify whether women’s inclusion is purposeful, or rather that their involvement is rather instrumental in the demonstrating that women are included. The essentialist view that can stem from women’s inclusion in peace and security is ultimately harmful and can be problematic, as women become tokens of the institutions, rather than an opportunity to implement meaningful transformation.

The panel was followed  by a Q&A session with questions regarding power structures that inhibit and promote women’s growth and roles in the institutions and processes of their peace and security. Women, Peace and Security is more than the ten resolutions that have been passed by the United Nations, and finding strong arguments to promote a more intersectional and inclusive role for women in peace and security must remain at the forefront of the conversation.

“Transformative work on peace and security involves a transfer of power.”